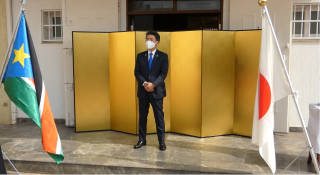 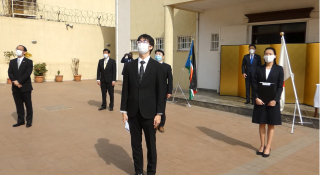 On 23rd February, Embassy of Japan in South Sudan held the Ceremony of Celebrating His Majesty the Emperor Naruhito’s 62nd Birthday.
Last year, we were not able to host a ceremony due to COVID-19.
This year, we decided to have a simple ceremony to celebrate His Majesty’s birthday as well as the national unity of the Japanese people taking COVID-19 prevention measures. Embassy staff attended the ceremony.

The speech made by Ambassador TSUTSUMI Naohiro is as follows:

Today, His Majesty the Emperor Naruhito turned sixty two. On behalf of Japan Embassy in South Sudan, I wish his majesty a very happy birthday.

Since the independence of South Sudan, Japan Embassy has been working very hard to promote the cooperation and exchanges between Japan and South Sudan. Our focus has been put on assistance to South Sudan’s self-help effort for peace and nation building in accordance with five principles: Proactive Contribution to the Global Peace, Human Security, the stability of East Africa, Cooperation in global issues, and active bilateral relations and exchanges. This Japan’s assistance for South Sudan has been done by not only the embassy staff but also many other individuals working at UNMISS, JICA, ODA projects, UN agencies, NPOs. A local government helped South Sudanese athletes. As a result, there is a growing friendship between the two countries now. South Sudanese people often call Japan “a true friend”. Besides, I very much appreciate the government of South Sudan for paying close attention to the safety of Japanese citizens in South Sudan.

Now South Sudan is in the midst of the final stage of the R-ARCSS implementation including the unification of the national forces, the constitution building and the national general elections. Japan believes that South Sudan will overcome such challenges to build a state of durable peace so that every single person can equally enjoy the human security. And Japan will continuously assist the South Sudanese efforts to this end. We will remain a “true friend of South Sudan”.