The Handing-over Ceremony of Freedom Bridge (19 May 2022) 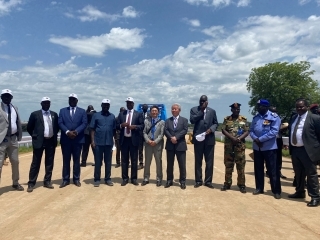 Group photo in front of the bridge 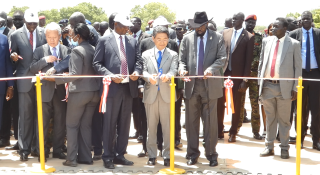 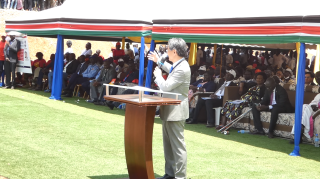 As-salaam Alaykum, good morning! It is my greatest pleasure to join you all today to celebrate the handing-over of Freedom Bridge.
First and foremost, I would like to praise the construction team of JICA, CTI Engineering and Dai Nippon Construction, composed of Japanese, South Sudanese as well as people from the third countries. They did complete this huge bridge. During the construction, they fully demonstrated the top-notch skills, professionalism, and self-sacrifice. They shared such skills with many South Sudanese engineers and technicians, too. As Ambassador of Japan, I am immensely proud of you.
I would also like to extend sincere appreciation to His Excellency President Kiir, the attending dignitaries, and the Government of South Sudan for giving the construction team necessary supports to overcome many difficulties having faced them.

Ladies and Gentlemen,
Japan has been enthusiastically assisting South Sudan for peace and nation building since its independence through from UNMISS (United Nations Mission in South Sudan), development projects to humanitarian assistances with more than 700 million US dollars and more than 4,000 Japanese nationals' involvement.
Taking this occasion, let me share my thought on one basic question: why does Japan help South Sudan?
There are five causes and motivations or, in other words, legitimate interests of Japan for doing so.
Firstly, helping South Sudan is perfectly in line with Japan’s foreign policy, “Proactive Contribution to the Global Peace”. Under the policy, Japan is always willing to help a peace building effort on the globe however it is far from Japan. Why? It is because such peace building is an indispensable component of the global peace on which Japan’s peace and security depends. The Japanese assistance to the peace building and nation building in South Sudan is embodying the Proactive Contribution to the Global Peace.
Secondly, Japan attaches great importance to the realisation of “Human Security” across the globe. This Human Security is the concept that every single human being should be entitled to live a safe and dignified life and should be allowed to develop his / her potentials to the maximum extent possible. Japan believes that Human Security should be guaranteed for South Sudanese people who have long suffered civil wars. To Japan, I believe, the contribution to the realisation of Human Security in South Sudan would add a glorious page to Japan’s History, too.
Thirdly, Japan needs stability in East Africa. To Japan, East Africa is the gateway to the African Continent. South Sudan’s peace and stability interrelates with that of East Africa. Japan expects that South Sudan will remain a stabilising factor in the region.
Fourthly, Japan wants to strengthen the cooperation with South Sudan in addressing global issues such as the rules-based international order, the UN reform, environment, etc. Until now, the bilateral cooperation is in a great shape. South Sudan extends support to many Japan’s candidacies in international elections. Japan highly appreciates South Sudan’s supporting of the UN General Assembly resolution of 24 March 2022 on improvement of the humanitarian situation of civilians in Ukraine under the Russian invasion. Japan hopes to continuously work with South Sudan in protecting universal values underpinning the global peace, security, and prosperity, including the rules-based international order.
And fifthly, Japan expects more active bilateral exchanges. I hear South Sudanese honey is popular among health conscious Japanese for its purity and naturalness. Maebashi City, north of Tokyo, hosted South Sudan national Olympic team for more than a year in preparation for TOKYO Olympic and Paralympic Games. This is a good example of grass-roots exchange. We hope to see more of them in the future.
These five causes and motivations and the achievements out of them show us that our bilateral relationship has not been unilateral, but mutually beneficial, and will be so.

Ladies and Gentlemen,
Japan highly commends the recent progress made in the implementation of the R-ARCSS including agreements pertaining to the formation of the unified forces. This demonstrates the unwavering leadership of the South Sudanese government to build a peaceful, prosperous, and democratic nation of South Sudan.
I reassure you, South Sudanese friends, that Japan will be continuously standing by you and assisting you as long as your self-help effort for durable peace and nation building continues. And Japan hopes to further strengthen the bilateral relations which would be even more mutually beneficial than ever.
Lastly but not least, dear South Sudanese friends, now Freedom Bridge is in your hands. Please take good care of it. This bridge will work very hard for you, laying itself down for you as “Bridge Over the Troubled Water,” for the development of this country, for the welfare and happiness of the South Sudanese people. And I am sure, Freedom Bridge will stand as the symbol of “true friendship” between Japan and South Sudan for many generations to come.